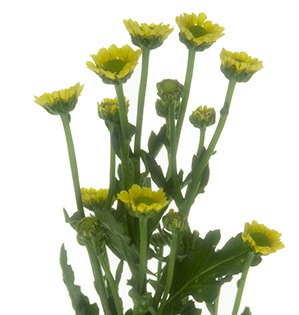 Description: A wide variety of shapes and sizes.

Botanical facts: The name is Greek for "Golden Flower."

Additional notes: Handle the flowers carefully to avoid shattering of the blossoms. To prevent blossom shattering in some cultivars which are highly vulnerable to shattering (Fuji & Spider Mums), you can spray a commercial product "Mum Tight" on the back of the blossoms, or you can melt candle wax on the back side of the flowers. Ancient China and Japan both have tales explaining how the chrysanthemum originated. The Chinese legend tells the story of an elderly emperor who had heard about a magic herb that would give him eternal youth. This herb was said to grow on Dragonfly Island and could only be picked by young people. The elderly emperor therefore sent twenty-four children on what proved to be a long and hazardous journey. Much to their dismay, when they finally arrived at the island they found it totally deserted. There was no sign of the magic herb. All they found was a flower - the golden chrysanthemum, which today still symbolizes the Chinese people's ties with their country. Later, Mao Tse Tung replaced the imperial golden yellow with the red of the People's Republic. The Japanese legend revolves around the god Izanagi and the goddess Izanami, who were sent to earth across a bridge of clouds because there were too many gods in heaven. When she arrived on earth, the goddess created the gods of the wind, the mountains and the sea, but perished miserably in the flames that sprang up while she was creating the god of fire. Izanagi, who missed her, followed her into a dismal place known as the "Black Night." When he finally caught a glimpse of the goddess, he was immediately pursued by an old witch. He fled back to earth, where he decided to cleanse himself in the river. The items of clothing he dropped onto the ground turned into twelve gods. His jewels turned into flowers, his bracelet into an iris, a second bracelet into a lotus flower and his necklace became a golden chrysanthemum. In Germany, people put white chrysanthemums in their homes at Christmas, to welcome baby Jesus.

◀Back to Resources - Flower Library