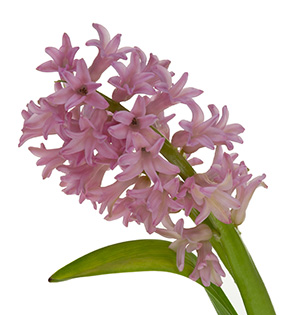 Botanical facts: The word "hyacinth" comes from the Greek Huakinthos, a young man fatally struck at a discus event. From his blood grew a flower which the god Apollo named after him.

Design notes: These beautiful and fragrant blossoms are a wonderful addition to spring arrangements. They work well in vegetative and botanical designs. The heavy heads need to be supported with a hyacinth stake inserted into the hollow stem prior to insertion in floral foam. Individual florets can be used in corsage work.

Conditioning: Cut 1/4 of an inch off of the stems with a sharp knife. Wrap stems in paper to keep them straight then hydrate in warm distilled water for two hours before storage or usage. Keep them in a container without other flowers for at least 24 hours.

Additional notes: Hyacinths, it is believed, were first cultivated in Europe by the ancient Greeks and Romans. Both Homer and Virgil described the plant's fragrance. The hyacinth known to these men would have been Hyacinthus orientalis, a native of Turkey and the Middle East and the genetic ancestor of our modern cultivars. This early hyacinth was a rather wan looking specimen. With only about 15 pale blue flowers in a loose raceme, or group of single flowers arranged along a central axis, on ten-inch stems, these plants were valued mainly for their scent. Whether due to their anemic appearance or other factors, the cultivation of hyacinths faded from Europe about the same time as the Romans did. The plant reentered European gardens in the 1560s, reintroduced from Turkey and Iran, eventually reaching the bulb-loving low countries of Holland. It was there that the tiny Hyacinthus orientalis experienced a centuries-long "fashion make-over," as skillful Dutch hybridizers transformed it into a full-flowered garden gem, earning the plant its popular name: the Dutch Hyacinth. Botanists at one time included about thirty species under the genus Hyacinthus. Botanical reorganizations over the years have moved most of these plants into other genera, leaving only three in the original family, of which only H. orientalis (with the exception of Hyacinthus orientalis albulus, a species strain native to southern France and now hardly ever grown) has garden-worthy offspring. All hyacinths found in the modern garden are cultivars, or man-made hybrids. Though the original species can still be found in nature along the eastern shores of the Mediterranean, it is no longer in cultivation or trade. In the mid-18th century, Madame de Pompadour - mistress of France's King Louis XV - ordered the gardens of Versailles filled with Dutch Hyacinths and had hundreds forced "on glasses" inside the palace in winter. The predominant fashion trend-setter of her age, the royal paramour's passion for these sweetly-scented Dutch bulb flowers sparked a national rage among the French elite. Today, the hyacinth remains a symbol of style and elegance, with the grand tradition of large formal beds planted with hyacinths carried on in many of the world's great public and private gardens.

◀Back to Resources - Flower Library